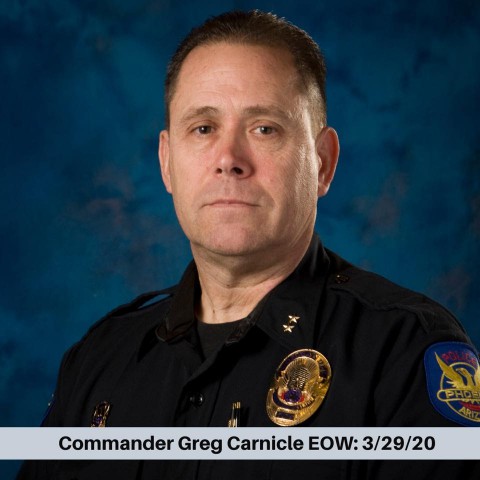 ALL of us in public safety morn the passing of Commander Carnicle, and pray for the impacted families and speedy recovery of the two other heroes as they recover from their injuries. This is a solemn reminder that life is precious, and we never know when tragedy will strike. PLEASE be safe out there and we thank our brothers and sisters working the street in the face of evil each and every night.

In addition, the Phoenix Police Department issued the following statement:

Critical Incident Update: It’s with heavy hearts that we announce the passing of a Phoenix Police Department Commander.

Greg Carnicle was shot in the line of duty on Sunday, March 29 on the scene of a domestic violence call. Two other officers were also shot during the incident at 40th Drive and Pinnacle Peak. The two officers are expected to recover.

Commander Carnicle was a 31-year veteran of the force and was just months away from retiring. During his distinguished career, he held positions throughout the department including the special assignments unit, K9 and he most recently oversaw all evening and weekend patrol operations.