Message From The President

As president of the Arizona Fraternal Order of Police, and on behalf of the entire membership, thank you for your ongoing support. Arizona is a great state, filled with great people, and served by great law enforcement officers. Our members work very hard to keep you safe and to protect your property. We look forward to partnering with you in supporting these dedicated professional public servants.

On January 25, 1934, Tucson Police Officer Frank Eyman was one of several officers who captured John Dillinger in downtown Tucson. Eyman, who later became Sheriff of Pima County and Warden of the Arizona State Prison in Florence (1955 to 1972), transported Dillinger to Chicago. While there, he had the opportunity to visit a Fraternal Order of Police Lodge, and returned to Tucson with paperwork to establish the first Arizona FOP Lodge; Tucson Lodge 1, whose members are Tucson PD officers. Later the same year, the Arizona State FOP Lodge and Phoenix FOP Lodge 2 were chartered.

Today, the Arizona Fraternal Order of Police represents the interests of more than 9,000 Arizona law enforcement professionals. Organized into 37 Local Lodges, we are the voice of those who dedicate their lives to protecting and serving our communities. Our members are committed to improving the working conditions of Arizona law enforcement officers and the safety of those we serve through education, legislation, community involvement and employee representation.

Thank you for your support. 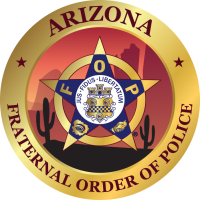